Bibleotherapy: What to read when you're at breaking point 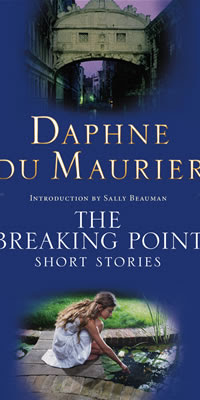 This week's bibliotherapy has particular resonance for me -- both because of its close relationship with my novel about Daphne du Maurier, and because of the last few months in my own life.
I'll be talking about 'The Breaking Point' at the Du Maurier festival in Fowey on May 10th. I hope to meet some of you there -- in person, or on this blog...

“There comes a moment in the life of every individual when reality must be faced,” wrote Daphne du Maurier in a prefacing note to her collection of short stories, ‘The Breaking Point’. “When this happens, it is as though a link between emotion and reason is stretched to the limit of endurance, and sometimes snaps.” The eight stories that followed are a clue to Du Maurier’s own breaking point, when she felt herself to be close to madness after her husband’s mental breakdown in July 1957, and her discovery of his affair. All are as disturbingly potent as her more famous short stories (‘Don’t Look Now’, ‘The Birds’), but perhaps the most intriguing is ‘The Blue Lenses’, set in a private nursing home like the one that admitted her husband, Boy Browning, when his collapse was kept secret from all but a handful of friends and family.

The patient in ‘The Blue Lenses’ is a woman, Marda West, recovering in ‘the anonymity of darkness’ after an operation on her eyes. As the bandages are removed, she sees everything – or rather, everyone – entirely differently. Her apparently loving husband now has a vulture’s head, threatening her with his ‘brooding eye, the blood-tipped beak, the flabby folds of flesh’; and the gentle-voiced nurse who has cared for her is a sinister snake, her ‘pointed barbed tongue swiftly thrusting and swiftly withdrawn’.

The medical staff are reassuring -- the operation had simply touched on a nerve (a reminder, perhaps, that the discreet label for Browning’s breakdown was ‘nervous exhaustion’), the surgeon makes an adjustment, and then explains, ‘the pressure threw out your balance’. But although the faces around her become human again, the story has a sinister ending: ‘Marda West took up the mirror and looked into it… The eyes that stared back at her were doe’s eyes, wary before sacrifice, and the timid deer’s head was meek, already bowed.’

‘The Blue Lenses’, and the rest of ‘The Breaking Point’, reflects a preoccupation with truth and deception, betrayal and divided loyalties, and the blurring of madness and sanity. Such is Du Maurier’s extraordinary skill as a writer that readers will follow as she teeters on the edge of the darkest abyss; but then she recovers her balance, and ours, again, and finds a way back from the brink.
Posted by Justine Picardie at 16:08 18 comments:

Bibliotherapy: what to read when you’re trying to let go

A relative unknown in this country, Mary Oliver is a best-selling, Pulitzer-prize-winning poet in the US, with a devoted following who flock to her lectures and readings. You’re unlikely to find her anthologies on a British high street, but Oliver’s poems travel the world via the internet, passed on by enthusiasts who admire her celebrations of nature and the indomitable human spirit. Recently, several readers of this column have sent me her poem, ‘In Blackwater Woods’; and I suddenly remembered that it had been emailed to my sister Ruth, a few weeks before she died of breast cancer.

“I am now becoming an internet poetry bore,” Ruth wrote, both grief-stricken and sardonic; then forwarded the following lines from the poem, which were also read at her memorial service (and, I suspect, at many other funerals). “Every year/ everything/ I have ever learned/ in my lifetime/ leads back to this: the fires/ and the black river of loss/ whose other side/ is salvation,/ whose meaning/ none of us will ever know./ To live in this world/ you must be able/ to do three things:/ to love what is mortal;/ to hold it/ against your bones knowing/ your own life depends on it;/ and, when the time comes to let it go,/ to let it go.”

I found the poem moving at the time, as I do now, as my sister did, as thousands of others continue to do so. But it also reminds me of what Ruth said in the same email – that after gruelling bouts of chemotherapy, she couldn’t “face any more treatment (though I might send off for some Native American gunk, having given up the acupuncture and healing, which has transparently failed.)” As it happens, Oliver’s poem appeared in a collection called ‘American Primitive’, and there are those who dismiss it as New Age gunk; indeed, one of her fiercest critics, the poet and academic William Logan, describes her as “the poet laureate of the self-help biz” (an indication of her strengths and failings). Which is why, if you’re desperate, Mary Oliver’s lyrical consolation might be an answer; but I fear that letting go is not quite as easy as she makes it look, much as we long for it to be so...
Posted by Justine Picardie at 17:18 18 comments:

Beauty and the beast 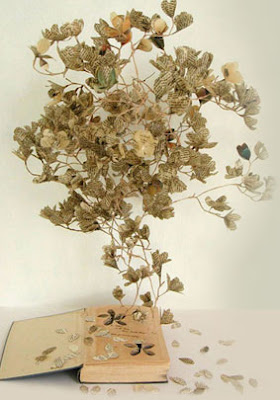 No Bibliotherapy this week; well, there is, but only in my head; am re-reading The Four Quartets -- and I can't find the words, because Eliot says them so much better. And am feeling somewhat incoherent.
But here (below) is my column from the Sunday Telegraph, and also, today's discovery (for me -- but it demands to be shared) of the work of Su Blackwell. I've posted a picture (above) from her website, which also includes details of her exhibitions.


You’d think that fashion and nature are diametrically opposed; for fashion demands artifice, control, the imposition of imperious demands on the natural form, at the very least, and at worst, its destruction. Thus the closest that many designers come to nature is when they use dead animals for adornment – furs and snake-skins; alligator handbags and mink coats; as if covetous of a majesty that will always be denied to our poor, naked, hairless bodies. As Angela Carter wrote in her version of ‘Beauty and the Beast’ – ‘The Courtship of Mr Lyon’ – “lions are more beautiful by far than we are, yet they belong to a different order of beauty”.

So what, precisely, was Alexander McQueen’s message in the catwalk show of his spring collection, with a video backdrop of a revolving earth, and a stuffed lion beside the runway, flanked by a zoo of taxidermy (an elephant, a polar bear, a giraffe, amongst other endangered species)? His programme notes mentioned Charles Darwin, the survival of the fittest and the damage caused by industrialisation; the clothes themselves used prints that drew on nature (delicate flowers, birds and wood grains), tailored into strict hourglass silhouettes. Thus, like an 18th century landscape gardener, McQueen proved his mastery over the wild, pruning and training and shaping it as his own.

Christopher Kane’s spring collection was more ‘Jungle Book’ than “Origin of the Species’; inspired, in his words, by ‘Planet of the Apes, The Flintstones, Racquel Welch in One Million Years B.C, and Dian Fossey and her gorillas.” Hence a dress emblazoned with a roaring gorilla’s face, that drew applause from the fragrant fashion editors at Kane’s London Fashion Week show (did they identify, on some primal level, with the display of raw gums and tongue and ferocious black teeth)? And if you really want to get into the simian look, there’s an even scarier version of the frock with gorilla bicep sleeves.

As for me: I’d be happier wearing t-shirts from the new Edun collection (an ethical clothing company established by Bono and his wife, Ali Hewson, in 2005, under the guiding principles of Fairtrade). I like two in particular, each printed with a photograph taken by Hewson in the Masai Mara. One is of a tree, another of a lion; both are suggestive of the Edun credo of respectfulness. All of which reminds me, again, of Angela Carter’s story of Mr Lyon. Lions, she observes ‘have no respect for us: why should they? Yet wild things have a far more rational fear of us than is ours of them…’
Posted by Justine Picardie at 15:22 14 comments:

Bibliotherapy: What to read when you're not going to the party 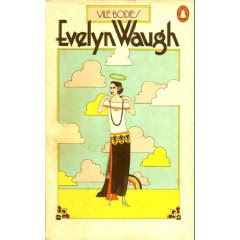 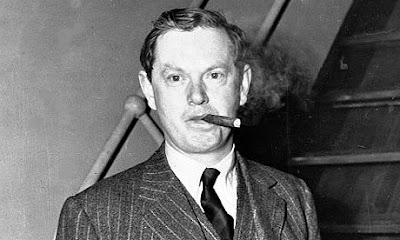 Were you invited to Donatella Versace’s party in London last month? No, me neither, nor to trot along with Kate Moss to Sir Philip Green’s birthday celebrations. Instead, I have been re-reading Evelyn Waugh’s ‘Vile Bodies’, a masterpiece for many reasons, including its brilliant dissection of the futility of frenetic partying.

Waugh wrote his novel in 1929 (it was published in January 1930), and he was still working on its final pages in the extraordinary days that followed the Wall Street Crash. Much has been made of the book’s shift in tone – from a sparkling comedy about the Bright Young Things to a dark prophecy of death and disaster – in the wake of the collapse of Waugh’s first marriage. But his narrative also seems to me to offer a perspective on the impending Depression – the hung-over morning after the wild night before – and is as relevant now, both in this and its sharp-eyed view of celebrity culture. Waugh’s central character, Adam Symes, is a novelist who becomes a gossip columnist, a commentator on the world of Bright Young Things, yet also absorbed into it; and the account of how they spin out of control remains as mordant now as it was in 1930. “Masked parties, Savage parties, Victorian parties, Greek parties, Wild West parties, Russian parties… almost naked parties in St John’s Wood… all that succession and repetition of massed humanity… Those vile bodies…”

Such is Waugh’s subtlety as a writer that he somehow manages to retain a strange sort of tenderness for those vile bodies, and also a curious mingling of irony and faith. (The title suggests a reference to the Christian burial service, in which Christ ‘shall change our vile body, that it may be likened unto his glorious body’.) Thus the sweetest moment of the novel – and it is sweet, for all Waugh’s famous savagery – is faraway from the parties, when Adam wakes up on Christmas morning with Nina, who he has loved and lost and sold to another man: “they put some crumbs of their bread and butter on the windowsill and a robin redbreast came to eat them.” Better to share breadcrumbs in quietude than swill magnums of champagne with a shrieking crowd of strangers.
Posted by Justine Picardie at 16:52 23 comments: