Chanel and film at the V&A 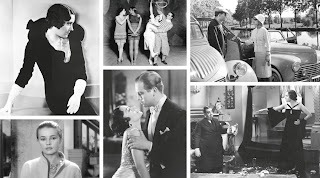 I'll be talking at the V&A tomorrow afternoon, as part of a series of events on fashion and cinema. There will also be the very rare opportunity of seeing 'Tonight or Never', featuring Chanel's costumes for Gloria Swanson, on Sunday afternoon. More details here... and a taste of the Hollywood glories below... 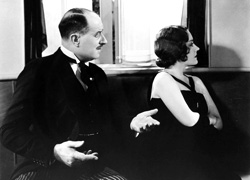 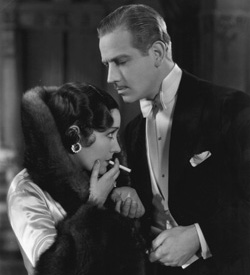 In conversation with Hannah Rothschild... 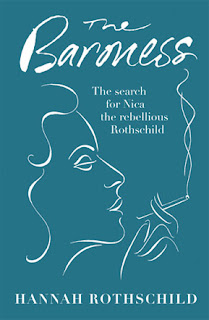 If anyone is going to be at the Du Maurier festival in Fowey tomorrow, then I do recommend the event with Hannah Rothschild, discussing her new book, The Baroness, an enthralling tale of her great aunt Pannonica, (otherwise known as Nica) who ran away to New York in the 1950s, having fallen in love with the jazz of Thelonius Monk. The narrative swoops from European Jewish ghettos to English mansions and French chateaus; from the Roaring Twenties to the Second World War; from edgy low life to haute bohemia. It's a musical odyssey, but also a search for hidden family truths: and, as Hannah says, whether 'we can ever really escape from where we come from?'
For those of you who are in London on Monday, I'll be talking to Hannah at Daunt Books in Marylebone High Street (7pm on May 14th). Meanwhile, here's an interview with her and an extract from The Baroness.
Posted by Justine Picardie at 10:10 14 comments:

The idea of a ball gown might seem anachronistic – gone are the days where a debutante spent a season whirling around in voluminous dresses, hoping to be swept off her feet (and thereafter down the aisle) by an eligible young man. But a new V&A exhibition (Ballgowns: British Glamour since 1950) suggests that the showstopping dress remains as potent a symbol of escapism as always. For here is the glittering material evidence of the continuing power of the Cinderella fairytale, wherein a girl’s life is transformed by the wand of a fairy godmother who declares ‘you shall go to the ball’. Alternatively, in the words of the V&A fashion curator Oriel Cullen, ‘ball gowns are so celebratory, created for a grand occasion, and encapsulating a special moment, that it seems appropriate to stage the exhibition now, in the year of the Olympics and the Jubilee’.

The pieces on show at the V&A span six decades: from Norman Hartnell’s royal gowns in 1950s, to Catherine Walker’s 1989 ‘Elvis’ design for Diana, Princess of Wales (so-called because of the high-standing white ruff collar, embroidered, like the rest of the silk outfit, with thousands of pearls), to more recent dresses by Alexander McQueen, Hussein Chalayan and Gareth Pugh. As such, the ballgowns mark a shift from the traditional splendour of the Coronation in 1953 to the celebrity exhibitionism of the red carpet; and also, as observed by Sonnet Stanfill (co-curator of the V&A exhibition), ‘from the private event to the public parade’. Not that the debutantes of the 1950s were kept from outside view: the social season included Royal Ascot and regattas at Henley and Cowes. They were photographed at Queen Charlotte’s Birthday Ball, all of them wearing long white dresses, as if in training for their future weddings, and arriving at Buckingham Palace to be presented to the Queen (a tradition described by Prince Philip as ‘bloody daft’, which finally ended in 1958).

Above all, the pageantry of the Coronation, with its attendant parties and receptions, was an opportunity for British ballgowns to be displayed at their most splendid, in a manner that went beyond the surface frivolities of fashion. Oriole Cullen notes that in the run-up to the Coronation, the Queen’s couturier Norman Hartnell had an atelier employing 350 people, not only producing ball gowns for society women, but also formal robes for all the female members of the Royal Family. ‘This parade of monarchy… which heralded the future reign of Queen Elizabeth II, was a welcome celebration for many after the years of austerity that followed the Second World War, and this most spectacular of ceremonies signalled a hoped-for return to a period of prosperity.’

Of the gowns on show at the V&A, one in particular demonstrates a touch of the gaiety and glamour that lightened the pomp of a royal occasion: designed by Hartnell for the actress Lilli Palmer to wear to a Coronation ball, it is of cream duchesse satin embellished with pink beaded petals and leaves, including a pair of saucily flamboyant flowers over each breast. And despite the widespread characterization of the early Fifties as an era of deferential convention in British society, the young debutantes who were presented at court were not immune to subversive tendencies: in 1952, firecrackers were discovered inside the traditional party cake at Queen Charlotte’s Ball, ready to explode when it was cut. As for sex, the ‘debs’ delights’ on offer were variously catalogued as MSC (‘Makes Skin Creep’) or NSIT (‘Not Safe In Taxis’); Patrick Lichfield, then a young Sandhurst officer who accompanied his sister as a debutante in 1958, confessed in his memoir to having fallen into the latter category, but remembered the season with some affection. ‘Those deb dances were, for a while at least, sheer magic; acre upon acre of pink chiffon and starched cotton effortlessly ebbing and flowing… the whole in constant motion all the while until I began to feel myself in serious danger of becoming socially seasick.’

Sartorial rebellion was inevitable, away from decorous ballgowns and toward the iconoclasm represented by Mary Quant, who opened her first King’s Road boutique in 1955. Two years previously, Quant had met her future husband and business partner, Alexander Plunket Greene, at Goldsmiths Art School; by then, although she admired Englishwomen’s tweeds, she was already dubious about the merits of their evening dresses. ‘Quite grand young women had to have their frocks made by aged retainers retired off in the upstairs attics of Victorian-style households,’ she writes in her recent autobiography. ‘Young women would point out the charms of some delicious dress in French Vogue and Mabel the ex-nanny would have a bash at making it, with some heavy fabric bought, reduced, in Jacqmar’s sale. The poor girls then had to compete with a chic debutante over from Paris…’

Quant, of course, became famous for her controversial mini-skirts; but the move to off-the-peg fashion was also apparent in couturiers like John Cavanagh, who introduced a boutique line of evening gowns for younger customers. Cavanagh had worked with Pierre Balmain in Paris for three years, from 1947, before opening his own premises in Mayfair in 1952, and his rigorous training in French couture refined his ready-to-wear designs. The V&A exhibition includes Cavanagh’s chic black petal dress, impeccably tailored but with a youthful insouciance, alongside a more startling mustard yellow evening gown worn by the young Princess Anne from the boutique range at Bellville Sassoon (the latter a design house established in 1953 by a former debutante, Belinda Bellville).

Not that the ballgown is the sole preserve of the ingenue, as is apparent in the designs of the redoubtable Hardy Amies, who opened his Savile Row couture house after distinguishing himself as a British Intelligence officer during the Second World War,  and received a royal warrant as the Queen’s dressmaker in 1955. The V&A collection contains two elegantly grownup gowns by Amies, one in subtle grey silk with a contrasting pink sash, and another in bold crimson satin, chosen by a Mrs Lister Bolton, that would look as confident now if worn by Cate Blanchett on a red carpet as it did in 1950.

But given their fairytale associations, it seems fitting that some of the most memorable ballgowns exist untrammeled in the imagination, rather than within the sealed vitrines of the V&A. As an undergraduate in the early Eighties, I would buy second-hand ballgowns (no one called them vintage in those days) from a stall in Cambridge market, for less than a couple of pounds apiece. The dresses were older than I was, yet perfect for all manner of youthful pleasures (my favourite, in lemon yellow chiffon, took me from picnics to garden parties to a Roxy Music concert). Sadly, none of them survived unscathed (torn on my bicycle, stained with grass or smudged with ink); unlike the gown most cherished in my memory, worn by Nancy Mitford’s heroine in ‘The Pursuit of Love’: ‘Linda had one particularly ravishing ball-dress made of masses of pale grey tulle down to her feet… and made a sensation whenever she appeared in her yards of tulle, very much disapproved of by Uncle Matthew, on the grounds that he had known three women burnt to death in tulle ball-dresses.’

Mitford wrote lovingly of Linda in 1945, looking back to a golden summer season before the grim shadows of the Second World War. In the reality of the harsh winter that followed, when rationing was still severe, Mitford ventured out to her first big party since the beginning of the war in an improvised dress, made by sewing an old nightie onto a cast-off satin ball-gown. ‘I think at balls it is better to look a joke than dreary don’t you,’ she remarked to her sister Diana. Subsequent pictures of Mitford reveal her to look neither dreary nor a joke; she used the money she made from The Pursuit of Love to move to Paris and buy herself Dior couture.

Nowadays, the ball-gown appears to be having something of a revival, and not only for Hollywood celebrities twirling on the awards circuit. Shanghai’s first debutante ball was staged in January this year, with ten British debs flown in for the occasion, to mingle with some of the richest people in China. In the new world of global capitalism, it seems that the ballgown still has a place in a fairytale with a twist; white satin and diamond tiaras, beneath the red flag of Communism flying high over the People’s Republic of China.