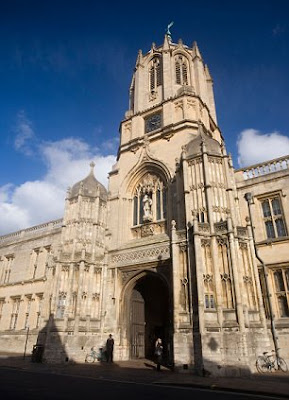 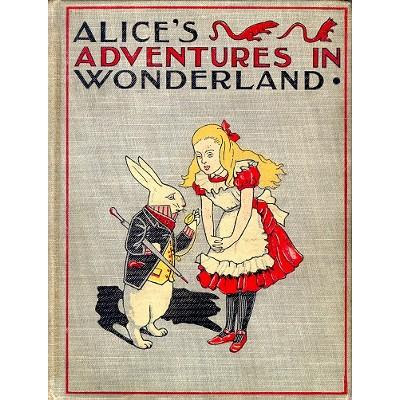 I'm talking at the Sunday Times Oxford Literary Festival at Christ Church on Saturday (March 31st, 12 noon; very much hoping that some blog readers might be coming).
Oxford is where I spent some of my childhood -- mostly very happy years, though also shadowed with several darker episodes, when my father's mental health was at its most fragile -- and Christ Church is a place that I associate with Lewis Carroll and Alice in Wonderland. It was here, my father told me, that Carroll -- or rather, Charles Dodgson, a mathematics don at the college -- had written his stories of Alice; and so when I went there with my sister, to the gardens and meadow, I half-imagined that we might glimpse the White Rabbit disappearing through a little gate, or even Alice herself, slipping just out of sight. My father was an academic at a different college, so Christ Church felt like foreign territory, which made it more magical, but I do also think of it as as a locked doorway into a past that contained moments of madness and incoherence, as well as joy. Like Lewis Carroll, my father loved riddles and clues and codes, but was also troubled by them, when his mind was at its most tormented.
As a child, I was as disturbed by the Alice stories as I was intrigued by them; their unsettling strangeness more frightening than the Narnia books that comforted me. Wonderland is a dangerous place to visit -- the pool of tears in which Alice nearly drowns, the ferocious Queen, the lunacy of the Mad Hatter's Tea Party -- but I look forward to returning to Oxford, and searching again for that elusive door into a forbidden garden...
Posted by Justine Picardie at 10:25 10 comments: 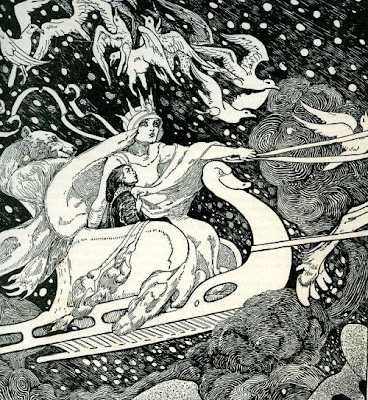 I've been writing, and re-writing, and discarding the threads of a near-impossible book. It's so damn hard -- to try to address something deeply personal, in the almost certain knowledge that exposure to the outside world might shrivel it up and turn it to ashes. I say 'it', as shorthand for the unsay-able -- in other words, the attempt to tell a story that begins with the end of a marriage, without being hurtful or damaging to anyone involved. Has anyone else read Rachel Cusk's 'Aftermath'? I did, a couple of weeks ago, and admire her courage in addressing a subject that seems to create such powerfully judgmental reactions (she initiated the separation from her husband). The reviews have veered to extremes; critics love it or hate it -- usually the sign of an interesting book, and Aftermath is vividly spiky, demanding, jagged, visceral -- but the online response is terrifying (volcanic acid spewing out of the internet). Needless to say, this has made me horribly uncertain about the idea of writing anything personal, which is perhaps an appropriate response.
I'm not sure why, but the anxiety sent me back to Hans Christian Andersen, to re-read The Snow Queen. What a strange, unsettling series of episodes make up the narrative -- so much more complicated than its modern interpretations tend to be. There's something profoundly compelling about the opening -- a devil-made mirror that reflects and refracts uncertainty, showing the worst of all worlds, and then smashes to pieces, the tiny fragments lodging themselves into the eyes and hearts of those thereafter doomed to see only the dark side... (Andersen himself being a writer more often drawn to the shadows than the light).
It cannot be coincidental that the Snow Queen was elemental in Daphne Du Maurier's writing, an archetype that seemed also to be summoned into her life (by the writer herself, as a character that sometimes blended into her mother, or her husband's lover -- the threatening Other Woman, too powerful to resist); so yes, I confess, I've been thinking about 'Daphne' again, and the process of reading and writing, and how to see clearly, without a shard of broken mirror in my eye.
Does any of this make a modicum of sense? Not to me, not yet, not clearly... but I'll keep trying.
Upon reflection (ten minutes later)... perhaps looking at the fragments of a broken mirror is inevitable, in the aftermath -- examining them, putting them down again, sweeping them out of sight, too sharp to touch, too dangerous to handle. And trying to reassemble them into some kind of order is as doomed a puzzle as the one attempted by the boy in The Snow Queen. Still, he was obsessed with numerical and logical processes -- while I'm more intrigued by intuition, however elusive, and the thoughts that lie just beyond our grasp.
Posted by Justine Picardie at 16:48 19 comments: 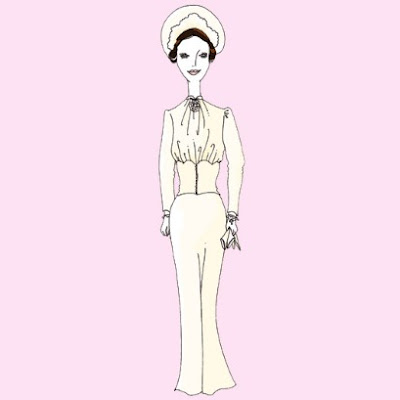 This is my last Closet Thinker for Stella, but not a goodbye to closet thinking. Perhaps it wasn't entirely coincidental that my sturdy old MacBook Pro finally gave up the ghost yesterday, and after three hours at the Genius Bar at the Apple Store in Brent Cross, I came away with my date retrieved, and a new laptop. I thought I'd be bereft to say goodbye to the old computer (it's seen me through the roller coaster of three books, thousands of articles, and a zillion emails and blogs) -- and actually, it's come home with me, for a safe retirement -- but the new one is thrilling, too.

Closet Thinker: March 4th
Ever since I started writing this column for Stella, over six years ago, I’ve been reminded each week of the way in which clothes are threaded through the stories of our lives; what we wear providing clues to who we are, where we came from, and how our futures might unfold. Fashion is a transient element -- an observation not intended as a dismissal, given that the intriguing vicissitudes of style can be a reflection of cultural shifts. But some material rises above fashion, whether christening gown or widow’s mourning. Just think of the shoes in which you walked towards independence; the suit that carried you into a different job; the jeans that reminded you that freedom is not only for the young.

And so it is that I find myself considering a wedding dress, after finding love the second time around; a symbol of how beginnings can arise out of endings, and alternative narratives unfold, even when a chapter of your life has come to a close. I still have my first wedding dress (white linen, from Nicole Farhi, worn when I was a slip of a girl; oddly undamaged, despite the onslaught of moths and time); but now I have the unexpected pleasure of finding a different dress, and joyous summer celebrations to come.

What should the grownup bride wear, when a white meringue is entirely inappropriate? Wallis Simpson provided a certain kind of chic template in June 1937, the divorcee in Mainbocher’s buttoned-up blue silk couture; reinterpreted with panache by Stella McCartney for her father’s new wife, Nancy Shevell, last October (in white, and shorter than the Duchess of Windsor’s full length gown; but with a similarly nipped in waist and long sleeves).

Given my immersion in the Chanel archives, having written a biography of Coco Chanel, I cannot help but be inspired by her iconic designs from the Twenties and Thirties; and doubtless my own passionate attachment to these was inspired by my mother’s choice of a Chanel-like little black dress for her wedding in 1960. Ideally, I’ll find an outfit that has a life beyond its ceremonial first outing (I’ve worn my mother’s wedding dress to countless parties), as well as suggesting tangible links with the past (something old, something new, something borrowed, something blue?). As yet, the details remain unclear; for in fashion, as in life, certainty can be elusive; which is no reason to fear the unknown. This is my last column as the Closet Thinker, but not altogether a farewell. Here’s to the future, and all that it may hold…
Posted by Justine Picardie at 07:17 17 comments: