Bibliotherapy: What to read (and what to eat) when your husband leaves you for another woman 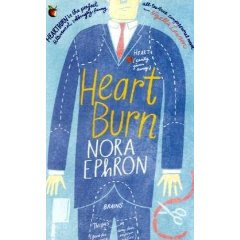 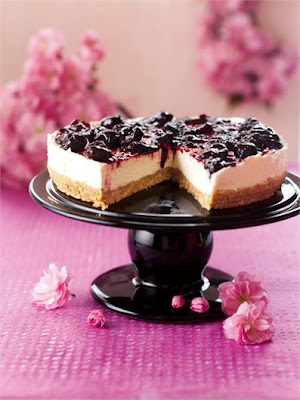 Here's my column in today's Sunday Telegraph. I feel that it should be accompanied by your recipes, given how many lovely people that contribute to this blog have already been sharing their heartwarming ingredients for what to eat while feeling heartbroken. It would be fantastic if you could post your recipes as comments at the end of this piece, so that other people can read them and find solace from them in similar circumstances. Vietnamese noodle soup, linguini with prawns, chocolate cake -- we've been talking about them together, and now let's get them written down, ready to be shared between Edinburgh and London, Minnesota and Melbourne, and everywhere and everyone else that reaches out with kindness, between the lines of this blog...

I'll start things off with a recipe for cherry cheesecake from Nigella Lawson. Nigella introduced me to the joys of cheesecake and Nora Ephron, and it's her fabulous cheesecake that is pictured above...


You might think that reading a novel is far less important than consulting a lawyer or a marriage guidance counsellor in these unhappy circumstances; but honestly, Nora Ephron’s Heartburn has much to recommend it instead. It’s a practical remedy in a ghastly situation – as cheering a voice as a dear friend in the dark hours before dawn, when you’ve been weeping into a pillow for several nights in a row.

Ephron wrote Heartburn in 1983 as a fictionalised version of the end of her marriage, a breaking point with particularly cruel timing, given that she was seven months pregnant with her second son. Her husband, Carl Bernstein (a Washington Post journalist famous for his part in uncovering the Watergate scandal), was, in reality, having a torrid affair with Margaret Jay, wife of the British ambassador to the United States. In her novel, Ephron turns her faithless husband into Mark, and Margaret into Thelma, and the whole messy situation into a beautifully written narrative.

As the author admits in an introduction to the most recent edition of the novel, over 25 years after its first publication, Heartburn is often referred to as ‘thinly disguised’. “I have no real quarrel with this description,” she observes, “even though I’ve noticed, over the years, that the words ‘thinly disguised’ are applied mostly to books written by women. Let’s face it, Philip Roth and John Updike picked away at the carcasses of their early marriages in book after book, but to the best of my knowledge they were never hit with the thinly disguised thing.”

In fact, ‘thinly’ is entirely the wrong adjective to apply to this great big heartfelt novel, filled with stories about marriage, guilt, love, loss, and how to make jokes, even when your world is falling apart. It also has an excellent recipe for Key lime pie covered with whipped cream to throw at a cheating husband; and another for cheesecake, which may not seem like the best cure for heartburn – it contains 12 ounces of cream cheese, 4 eggs, a cup of sugar, and two cups of sour cream – but trust me, cheesecake is tremendously good for heartbreak, along with a large helping of Nora Ephron.
Posted by Justine Picardie at 23:50 29 comments:

The paperback of Daphne 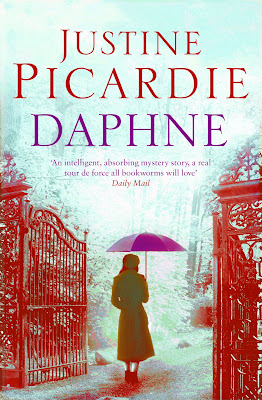 ... is out next Monday. Please tell your friends! Here's the cover -- hope you like it. And here's the link to amazon -- please spread the word. Am having an utterly vile time (have just walked home weeping), but am trying to Think Ahead. Must post news of literary festivals: Glasgow Aye Write, on March 9th; Ways With Words, in Cumbria on March 6th; and trips to Leeds on March 5th, Newcastle on March 19th and Harrogate (I think) for a Yorkshire Post liteary lunch on March 26th. Will go and drink camomile tea, and pull self together...
Posted by Justine Picardie at 14:17 29 comments:

Before I Say Goodbye

Here's a piece that I wrote in today's Sunday Times about Jade Goody, in the context of my sister, Ruth Picardie. It's a huge subject, and difficult to encapsulate in 1800 words, but here they are...
Posted by Justine Picardie at 01:31 21 comments:

To readers of 'Daphne', you've probably already noticed by now that my life appears to have taken a nasty turn for the worse, following a somewhat unnerving pattern established in my novel, which is itself based on the disturbing patterns in Daphne du Maurier's life, that she reflected and refracted in her writing. Is this the curse of J.M Barrie? Or sheer coincidence?
Posted by Justine Picardie at 01:27 20 comments:

Heartburn and the mysterious S...

Just found a tiny message from the mysterious giver of Heartburn. It was on the amazon delivery note, and said, 'No woman should be without Heartburn at a time like this! sxxx'. First of all I thought it was from my friend Sophie, but she says not. (I am eating cakes with her on Friday, as an alternative means of solace). Anyway, thank you to lovely S.
Posted by Justine Picardie at 00:58 No comments:

... to the anonymous good fairy godmother who sent me a copy of 'Heartburn', express delivery by amazon this evening. It is much, much appreciated, as my copy had disappeared. I wish I could say thank you on a more individual basis, but there was no note of the very kind sender, just a brilliant book that speaks for itself that I shall re-read right now.
Posted by Justine Picardie at 15:21 5 comments:

Bibliotherapy: What to read when you are losing faith

Towards the end of 1875, Gustave Flaubert wrote a number of gloomy letters describing his poor health and impending financial ruin. He was only 54, but felt far older, suffering from the continuing effects of epilepsy and syphilis, and the hurtful attacks of critics. Flaubert’s theatrical debut, The Candidate, had flopped the previous year, surviving only four performances, and the publication of The Temptation of St Anthony – upon which he had laboured for quarter of a century – was equally disastrous. “Torn to pieces,” he wrote, noting “the hatred underlying much of this criticism… This avalanche of abuse does depress me.”

Yet by March 1876, he was working on ‘A Simple Heart’, a story responding to the advice of one of his closest friends, George Sand, who had suggested that Flaubert’s books were responsible for ‘spreading unhappiness’, and that he might attempt a different, more heartening approach. For inspiration, he borrowed a moth-eaten stuffed parrot from Rouen Museum (more details of which are to be found in Julian Barnes’ wonderful book, ‘Flaubert’s Parrot’).

The ensuing story, according to Flaubert’s own description, ‘is just the account of an obscure life, that of a poor country girl, pious but fervent, discreetly loyal, and tender as new-baked bread. She loves one after the other a man, her mistress’s children, a nephew of hers, an old man whom she nurses, and her parrot. When the parrot dies she has it stuffed, and when she herself comes to die she confuses the parrot with the Holy Ghost.’ This may sound more grotesque than consoling, and yet ‘A Simple Heart’, based in part on Flaubert’s childhood, is strangely uplifting. Felicite – the girl with a simple heart, who grows old but never grows hard – has lived a life filled with loss, yet her love and faith is undiminished. Loulou -- the parrot that speaks without understanding or freedom – could be seen as a metaphor for the pointlessness of a writer’s life, or the confines and limitations of language; yet the story of the bird and Felicite escapes from easy interpretation, into something entirely itself. Whenever I read it, I feel my faith restored – in writing, in human nature, in our mysterious capacity to find consolation amidst desolation, and in the enduring magnificence of parrots.
Posted by Justine Picardie at 13:35 10 comments:

... despite appearances to the contrary online, I am actually coping reasonably well, given the circumstances...
Posted by Justine Picardie at 16:08 12 comments:

Is the blog having a breakdown?

It seems to have returned, after a blank few hours. Perhaps my computer is emotionally involved with me...
Posted by Justine Picardie at 16:07 2 comments:

What has happened to my blog?

My entire blog has disappeared! How did that happen? The whole screen has gone blank. Help!
Posted by Justine Picardie at 16:05 1 comment:

What to read when your husband has left you for another woman...

Any suggestions? All help gratefully received, on this rainy black night in february...
Posted by Justine Picardie at 14:46 29 comments:

Bibliotherapy: What to read when you don't have a Valentine

The timing of next week’s Valentine Day may seem particularly cruel, if you are feeling loveless and forlorn on Saturday night, when others have true love and roses. It is at moments such as these that one needs a kindred spirit; and Edith Wharton has always seemed to me to provide that companionship, however bleak her stories of love and loss.

Her fiction is filled with characters that have their hopes crushed, and passions betrayed – and parallels are therefore often drawn with Wharton’s own life (an unhappy marriage to an unstable man, followed by a love affair with a bisexual, faithless bounder). Yet for all the unhappiness she suffered, interspersed with episodes of ill health, Wharton escaped from her claustrophobic past, prospering as a thoroughly independent, brilliantly successful writer. And nowhere is her brilliance more dazzling than in ‘After Holbein’, published in 1928, which tells the story of an aging New York socialite named Anson Warley. He is the type of man who would never spend a Saturday evening alone – or indeed any other night of the week – and prides himself on his unshakeable social status. “It was still a privilege, a distinction, to have him to dine”; and those who sought him at their tables “had to offer very special inducements in the way of cuisine, conversation, or beauty. Young beauty; yes, that would do it. He did like to sit and watch a lovely face, and call laughter into lovely eyes.”

But on the wintry night of the story, Anson Warley forgets where he is supposed to be dining, and ends up at the mansion of Evelina Jaspar, an elderly lady ‘who was gently dying of softening of the brain [but] still imagined herself to be New York’s leading hostess… and still came down every evening to her great shrouded drawing-rooms, with her tiara askew on her purple wig”.

‘After Holbein’ suggests that youth and beauty fade, and social hierarchy crumbles; that in the end, we are alone, united only by inescapable death. It might seem a bit sombre a message for Valentine’s Day, but there’s something to be said for Wharton’s icily cold blast of fresh air, to dilute the pervasive fug of perfumed romances.
Posted by Justine Picardie at 15:00 14 comments: