Bibliotherapy: What to read when you lose your purse. 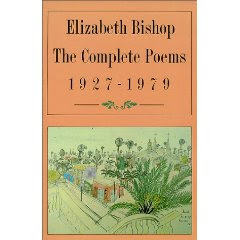 Recently, when I lost my purse – or rather, just after it was stolen from me – I felt a momentary version of the grief that accompanies far greater loss. Numbness, shock, anger, denial, acceptance, played out in half an hour, and then it seemed unseemly to care. After all, no one had died; it was only money that had been stolen from me; the loss was of an inanimate object.

And then a friend reminded me to re-read ‘One Art’ by Elizabeth Bishop, with its beautifully controlled opening stanza: ‘The art of losing isn’t hard to master; so many things seem filled with the intent/ to be lost that their loss is no disaster.’ The poem comes from Bishop’s final collection, published in 1976, three years before her death; and, like its title, appears to suggest that the art of losing is reflected in the art of writing, and vice versa. If, as in life, every loss reminds us of a previous sorrow (the vanished purse, the missing lover), then Bishop (a Pulitzer Prize winner and US Poet Laureate) offers mastery of language to contain the messiness of long-lost or looming disaster.

Bishop herself was no stranger to loss: her father died when she was a baby; her mother suffered from mental illness and was confined to an asylum; and one of the great loves of her life, a Brazilian woman with whom Bishop lived for 15 years, committed suicide. A self-confessed opponent of self-confessional poetry, unlike many of her contemporaries (‘Art just isn’t worth that much,’ she wrote disapprovingly to Robert Lowell, after he used his wife’s letters in his writing), Bishop nevertheless gave some clues to the grave losses she suffered. ‘I lost my mother’s watch,’ she writes in ‘One Art’, as if in passing; though the material loss of a watch was also an echo of her mother’s absence in childhood; of the loss of both parents to watch over her.

‘One Art’ emerged out of 17 drafts, evidence of the tension between a poet’s artfulness and the artlessness of grief; of what happens when words fail us (‘it may look like (Write it!) like disaster’), as does love; not that we ever stop searching for what we have lost, and what we might still be looking for.

Port Eliot: through the window 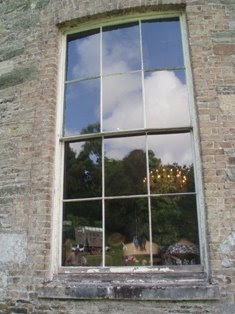 Got back last night from Cornwall, and a good time was had by all. I did a bit of guest-blogging on Saturday over at dovegreyreader, so you could catch up with the festival there. This is dovegrey's picture of my event in the round room, taken from outside, because she couldn't get in, which was a shame, but I do like the photograph.
I have eaten lots of whitebait and chips from the seafood stall at Port Eliot, sustained my strength late into the night with Snickers bars, caught up with old friends (Kate Summerscale, William Fiennes), made a new friend (Hari Kunzru), and met an all-time fashion heroine -- Barbara Hulanicki -- who was creating sparkly space age outfits for festival goers, alongside inspired hats by Stephen Jones. I remember being taken by my mum to Biba when I was a little girl, and she used to buy clothes there, first from the Biba boutique in Kensington Church Street, and then from the big emporium on Kensington High Street. I think it was there, at the age of five, sitting in the changing room beneath a cloud of feather boas, watching my mum try on a pink and purple striped mini-dress, that I realized the potency of fashion...
Anyway, many thanks to everyone who came to see me at Port Eliot, and to everyone who made it into such a magically diverse and engaging weekend, particularly Peregrine and Catherine St Germans, who have opened their house and garden to all of us, with magical consequences.
More to come, but must get on with Chanel for the rest of the day...
Posted by Justine Picardie at 01:49 6 comments: 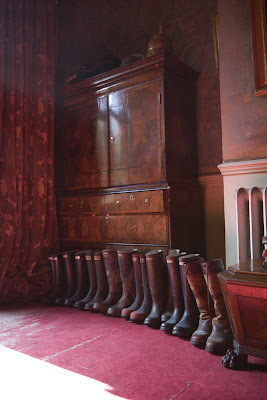 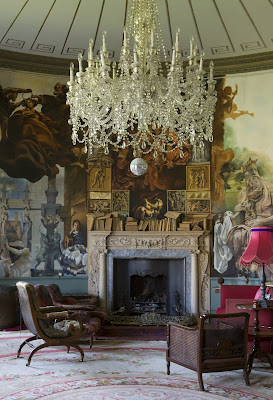 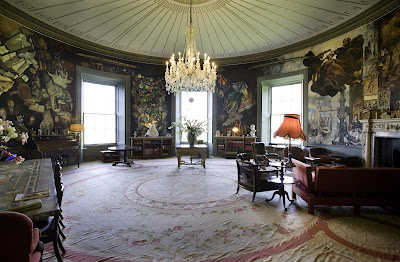 I've just looked up the weather forecast for this weekend's festival at Port Eliot, and it's sunshine and the occasional shower, as you would expect. But for those of you who are coming to Cornwall for the weekend -- and I very much hope some of you are -- my event is taking place inside the house in the Round Room, which as you can see from the pictures, is very beautiful, and will provide a congenial setting for conversation. I'll be in situ at 4.45 on Saturday afternoon. See you there... (and now I'm off to search for my wellies, which appear to have been requisitioned by teenage sons for other festivals, and have mysteriously vanished, or perhaps simply joined the sediment of lost boots at Glastonbury).
Posted by Justine Picardie at 16:31 10 comments:

Bibliotherapy: what to read in a British summer 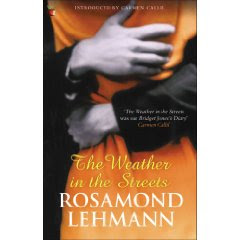 The weather, as we all know, is an abiding British preoccupation, particularly at this time of year; and though it is a truism that we talk about the weather for want of anything better to discuss, or as a means of evasion or self-defence, it is also central to our psyche. This much, and more, is evident in ‘The Weather in the Streets’, Rosamond Lehmann’s fourth novel, which takes up the story of Olivia Curtis, a decade after she appeared as the heroine of the coming-of-age classic, ‘Invitation to the Waltz’.

As the title suggests, the weather is as integral to the unfolding tale as its other central character, Rollo Spencer, Olivia’s handsome, rich married lover. Their affair begins in the winter, but the turning of the season (and the hours) is suspended, apparently superseded by the momentum of passion: ‘the time began when there wasn’t any time… Beyond the glass casing I was in, was the weather, were the winter streets in rain, wind, fog.’ But when summer is upon the lovers, the weather is impossible to shut out behind closed doors or glass. In the sunshine of July, after some weeks apart, Rollo visits Olivia at a country cottage in Oxfordshire: ‘Alone together all the afternoon. Oh, at last!… It was so still, we heard the hot bees burning in the rosemary. The blind knocked, knocked. Through it the violent afternoon light was purple, almost black.’ Afterwards, they swim in the river, where the ‘westering sun was spilled all over the water’; later, in the warm darkness, ‘stars pricked the blue-iris air.’

The weather cannot always be forecast with accuracy, and nor can affairs of the heart; all that is certain is that time passes, implacably, as does the summer. Rollo returns to his wife, Olivia to London, to the dog days of August: ‘To be alone… in this dry, sterile, burnt-out end of summer… among stains and smells, odds and ends of refuse and decay.’

Olivia, like Rosamond Lehmann herself, and so many of her readers, has not loved wisely, but even as the relationship with Rollo seems to come to its unhappy ending, yet there is a new beginning; for the weather, like a woman, has a will all of its own.
Posted by Justine Picardie at 15:08 14 comments:

On losing a purse and wordlessness

This is not a bibliotherapy, because I don't have much in the way of words of advice today (for myself, nor anyone else). I'm going away very early tomorrow morning, with my younger son, and as is often the way with bad timing, my purse was stolen this afternoon. Driving license, credit cards, holiday cash -- all gone, the lot of it. It doesn't really matter, not in the greater scheme of things -- these are inconvenient losses, nowhere close to those big ones that shake everything up, so that they fall down in broken pieces.
But every small loss brings with it an echo of a larger one; sometimes just a bat squeak, the tiniest of reverberations, that set one's alarm bells ringing. 'What if?' you think; 'what next?'. If you have existed in a state of alertness, for whatever reason (and I have been living in a heightened state of anxiety, for a number of months), and then something happens -- the small thing, the stolen purse, the thieves you did not protect yourself against -- you wonder (I wonder), am I paying attention? What will I miss next?
None of which is very helpful; too much of it, and that way madness lies. So here I am (or am I here?), without signposts, trying to write my way out of the wordlessness of panic.
[pause for breath].
[and another one].
Posted by Justine Picardie at 12:09 20 comments: