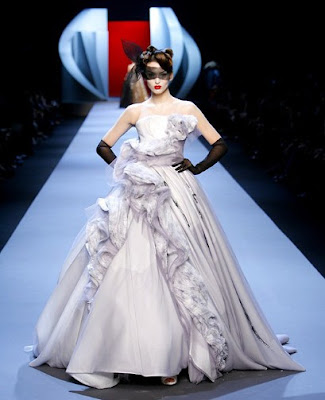 While having lunch today at the Berkeley hotel -- meeting very clever Sylvie Chantecaille -- who should be at the next table but John Galliano? He looked thin, serious, and sober -- drinking water, eating little, head down, but doubtless in town to finish the final touches to Kate Moss's wedding dress in time for tomorrow; of which more here...
Posted by Justine Picardie at 14:42 6 comments: 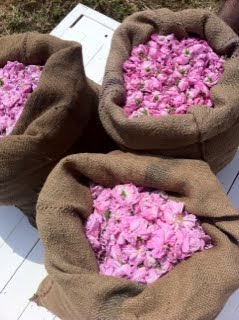 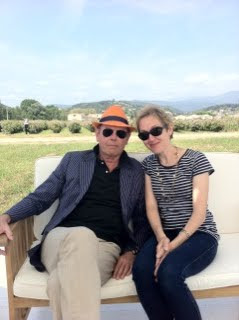 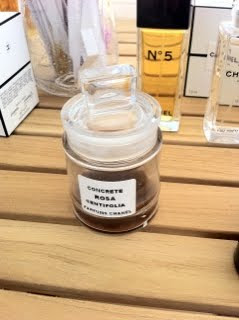 I feel so behind with everything, at the same time as moving forward. It was my birthday last week -- 50, which seems impossible, when I still feel the same inside -- and this has been a year of so many changes. There have been adventures, like my trip to the rose fields of Grasse last month, where I saw the harvest of May roses for Chanel No. 5, and renewed my acquaintance with Jacques Polge, the legendary Chanel nose who I'd already interviewed for my book. (He's the dashing gentleman in the hat in the photograph above; I'm the dorky one beside).
Since then, I've been rushing, rushing, rushing -- to the supermarket, away from deadlines, to the Hay Festival, back to the shops, to the dry-cleaners, late for the tube, to and from the school, on to the airport, over to Moscow and St Petersburg, back home, into the kitchen, head inside the dishwasher. None of this is a complaint -- at 50, I know how very lucky I am, and how much I love being at home, as well appreciating the wondrous journeys that Coco Chanel has sent me on.
But anyway, here I am in Crouch End again, deadheading the roses this afternoon, because it's already the end of June. Where did the month go, let alone the last year?
While catching my breath, I'm also trying to gather my thoughts -- the ones that bloom and then fade like petals -- and am venturing into the new territory of my next book. All of which makes it a good moment to post this poem by Robert Herrick, which I love, though in an entirely different way to when I first read it, decades ago, as a teenager. If I could meet my younger self now, I could not tell her to do anything differently -- for if I had tarried, my beloved sons would not have been born -- but I might also suggest that life need not end at 30, or 40, or 50. Of course, sometimes it does -- my sister Ruth died at the age of 33 -- and terrible things can befall us (divorce, death, the ordinary disasters of life that everyone shares). But when happiness appears, as if by magic, then enjoy it -- love life, seize its pleasures, yet also cherish its fragility with tenderness.

GATHER ye rosebuds while ye may,
Old Time is still a-flying:
And this same flower that smiles to-day
To-morrow will be dying.

The glorious lamp of heaven, the sun,
The higher he 's a-getting,
The sooner will his race be run,
And nearer he 's to setting.

That age is best which is the first,
When youth and blood are warmer;
But being spent, the worse, and worst
Times still succeed the former.

Then be not coy, but use your time,
And while ye may, go marry:
For having lost but once your prime,
You may for ever tarry.
Posted by Justine Picardie at 07:31 8 comments: 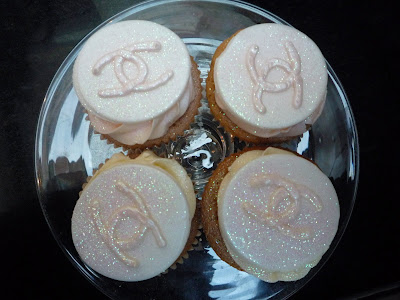 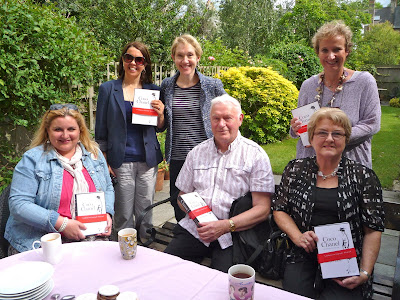 From beyond the computer and into my back garden: welcome to Enid from Cape Town, Jaywalker from Tasmania, and Lilac in May from Marlow, plus friends (including Lazywell, who took the photographs with his customary panache). A good time was had by all: we ate gorgeous cupcakes from the Love Bakery, and a delicious homemade cake baked for the occasion by Lilac in May (if we're very lucky, she will post her recipe). The wind blew hard, but the rain held off -- so there we sat, discussing reading and writing; life and love and art, and the blurring of the lines between them. How sweet it was to meet the people that I have come to know on this blog -- to put faces to names, and to hear the voices that emerge from between the lines. We toasted absent friends -- all the other readers here, and elsewhere, and the connections between us -- and wished that Kairu could have magically appeared, as if from Narnia and into north London.
Here's to more summer days, and longer conversations; to friendship in all its forms, and a great many cakes.
Posted by Justine Picardie at 12:12 11 comments:

From Russia, with love... 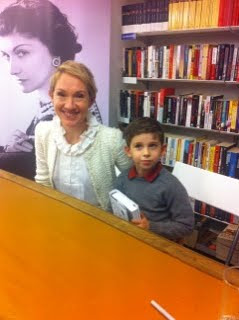 Just returned, and my head is still spinning with a kaleidoscope of images from St Petersburg and Moscow. The white nights, Picasso and Rembrandt in the Hermitage, the reflections on the dark river; Cartier directly opposite Lenin's mausoleum in Red Square, the ancient icons within the Kremlin, the Faberge eggs and Imperial jewels in the Armoury; the seven towers that Stalin built, looming like Gotham City; the Madonnas and angels and other winged creatures that have survived, against so many threats...
But above all, the people: I met with such kindness and warmth, and felt the tug of threads that I had never known before; the curve of cheekbones that contained within them the lost faces of my Russian grandparents.
All of these just blurred snapshots, I know; impossible to do more than glimpse the tiniest fraction of such a vast nation, so many centuries of turbulence and tragedy and triumph... It seems presumptuous even to try, but still, I want to thank everyone who took the trouble to talk to me, and share their ideas and conversation, including the six-year-old boy who came to his first bookshop signing in Moscow, and sat through the hot evening, listening to a foreigner.
Now past midnight, and time for bed, at the end of my birthday. But instead of feeling my age, I am overcome with the wonderment of discovery, and of knowing how much more I want to know, and to explore...
Posted by Justine Picardie at 15:34 8 comments:

The Bishop's Palace at St David's...

If ever you find yourself in Wales, then do go westwards to Pembrokeshire. It's magical; the standing stones and Celtic crosses, the wild sea and the sheltered, ancient churches. There is the same feeling as being on the edge of things as in Du Maurier's Cornwall... those places where you sense the the veil between the past and the present becoming translucent.
Posted by Justine Picardie at 10:18 15 comments:

A rainbow in my back garden... 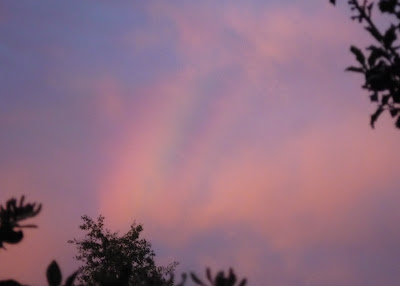 And a poem by Emily Dickinson.

The rainbow never tells me
That gust and storm are by,
Yet is she more convincing
Than Philosophy.

My flowers turn from Forums—
Yet eloquent declare
What Cato couldn't prove me
Except the birds were here!
Posted by Justine Picardie at 09:04 10 comments: