Here's the review of Mary Quant's autobiography that I wrote for the Guardian, or you can read it here, albeit without any paragraph marks (see below), due to unfathomable technological issues. (For some reason, whenever I click on the Guardian website, my computer also goes into a spin). It looks like her original memoir is going to be reissued by V&A publishing later this year, so I look forward to reading that, as well. I don't remember my mother wearing any Mary Quant -- she was more of a Biba fan -- but I did find a wonderful second-hand black and white Quant check mini-dress when I was a student, which I wore as often as possible, until it fell apart. It's one of those pieces that perhaps I should have kept for posterity, but at least I had fun in that dress, cycling around Cambridge, whatever the weather. Speaking of which, I have never seen my garden so wet as this week; the lawn has turned into marshland, and the borders are overflowing with rainwater. Good for the plants, given that we're in a drought, but I'm longing for some sunshine. Feeling a bit gloomy at the prospect of an equally rainy May (is it just me that feels sleepy after days and days of grey skies?), which is apparently what we're forecast, but I suppose the trees will be thankful... PS: a query to anyone else who uses blogger. There seems to have been an 'upgrade', but it strips away the paragraphs when you post, even though they appear to be there in preview. Any advice?
Memo to self: consult great blogger in the sky... 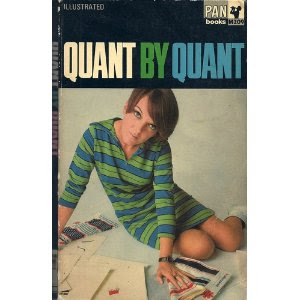 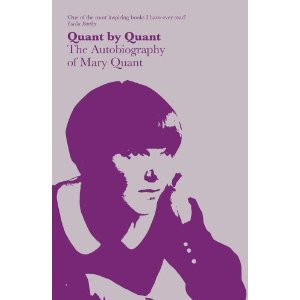 The autobiographies of fashion designers have a tendency to cover up as much as they reveal, which might be an artful indication of their craft, albeit frustrating for the reader. Coco Chanel embarked on several failed attempts with ghost writers, and then decided against all of them; Christian Dior produced a tantalizingly opaque account of his life, with little in the way of personal detail; while Elsa Schiaparelli was as creative in reinventing her past as she was with her surrealist costumes, leaving the briefest of memoirs behind her.
So it is with Mary Quant’s autobiography, which skims through her life with almost as much brevity as the miniskirts that made her famous. The book itself is a solid looking object – too solid, perhaps, for such a stylish subject, with cheap-feeling paper and a paucity of pictures – but the words skitter about all over the place, in truncated chapters and an eccentric narrative that incorporates lists but avoids linear convention. Quant’s account of how she found herself at the centre of the Swinging Sixties, as a designer and icon of the era, is impressionistic, and sometimes sketchy. Her itinerant wartime childhood is dealt with in less than six pages, skipping over her parents, who met at Cardiff University as ‘the prize pupils of their vintage’, thereafter becoming teachers, like Quant’s Welsh maternal grandparents. There is an occasional clue about the source of her fashion inspirations; in a school history exam on the Roundheads and Cavaliers, she declares herself to be on the side of the latter, based on their ‘accessories, hair styles, hats, make-up, toiletries...’ And she spies the ‘vision of chic’ at a childhood dancing class, who will form the basis for her future designs: ‘A girl with bobbed hair, wearing a black skinny-rib sweater, seven inches of black pleated skirt, black tights under white ankle socks, and black patent shoes…’
It is this girl, an eight or nine year old, that Quant takes as her model for the Sixties dolly bird; child-like, with white socks exposing colt legs, a Lolita apparently liberated by the Pill. Not that Quant herself is immune to the inconsistencies of the sexual revolution; everyone adores her, but her beloved husband and business partner, the upper-class hipster Alexander Plunket Greene (‘a 6’2” prototype for Mick Jagger and Paul McCartney rolled into one’) is as unfaithful as his father had been in a previous generation. ‘Alexander was a hell of a womaniser, like his father, and that makes life bumpy,’ she admits, in a rare moment of emotional candour, before blaming herself in a manner almost untouched by notions of feminism. ‘I was working so hard and obsessed with design, so I knew it was partly my fault. Women would telephone me and say, “Can Alexander come out to play today?” And I would find little presents for him left in the car. The trouble was he was such fun to be with until he became too ill, and by then one cannot do anything about it.’ Her husband’s illness and death at the age of 57 is not referred to again until close to the end of the book, with a cryptic reference to alcohol: ‘He said he could not live without wine and vodka anyway.’ Other than that, ‘he just petered out… I can’t bear to write more about Alexander’s exit as I will never get over it.’
Curiously, Quant’s descriptions of the Sixties also verge on the hazy – inevitably, perhaps, because of the whirlwind that spun around her – with repetition taking place of recollection. (‘Everything was changing. Chelsea was changing… Change, change, change.’) Names are dropped, as visitors swing down the King’s Road from the Royal Court Theatre to her boutique, although without much more in the way of context or analysis: ‘John Osborne, Claire Bloom, Susannah York, Audrey Hepburn, Brigitte Bardot, Leslie Caron and, later, pop artists and musicians like the Beatles and the Stones, photographers David Bailey and Richard Avedon, film directors Stanley Kubrick and Joe Losey, and models like Jean Shrimpton and Twiggy. Why it caused such heated attention from the start is hard to understand…’
When she does write in more detail, it is with considerable panache, as with her evocation of an earlier post-war youth, when rationing still prevailed: ‘London was a bombsite and the only thing that thrived was the buddleia… If you went out to tea you took your own private plate of rancid butter and kept a sharp eye on it… Fog permeated everything. Fog was a smell. Fog was a colour.’ In the aftermath of this austerity, a new decade explodes into colour, but not always with the clarity or vividness in Quant’s memoir that you might expect.
Nevertheless, this is a story to be cherished (indeed, one wishes that the publishers could have lavished it with more care). Quant’s understanding of the language of fashion is as astute as the way in which she shaped traditional gentlemen’s tailoring, pinstripe City suiting and herringbone tweeds into the clothes that she and her friends wanted to wear. In this, she had something in common with her predecessor Coco Chanel – that sharp sense of how to turn masculine classics into androgynous style with a feminine twist – and like Chanel, Quant built a global brand out of herself. Whether this can survive with anything like the same success remains uncertain (she resigned as a director 12 years ago from the company that bears her name, after a Japanese buyout). But the hidden history of Mary Quant will continue to be every bit as intriguing as before.
Posted by Justine Picardie at 09:01 11 comments: 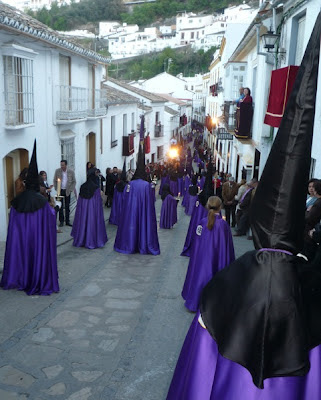 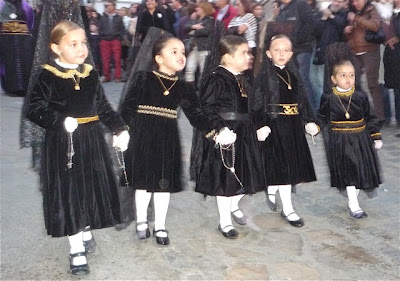 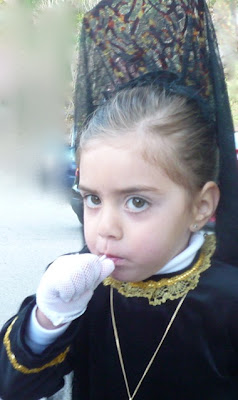 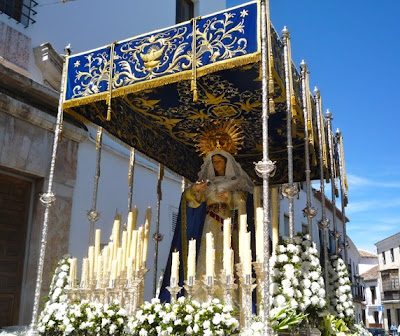 I'd never before seen Holy Week celebrations in Spain, until this year, for an Easter weekend near Ronda, and it was the most extraordinary sight; somehow more foreign than anything else I've witnessed in Western Europe. The penitents, hidden behind their hoods and cloaks, and the cavalcade of processions, where the figures of Christ and the Virgin Mary are carried aloft, and the little children, in robes or mantilla lace... it was beautiful and sinister, glorious and strange, not staged for tourists, but entirely by and for the local people. I wished that Daphne du Maurier could have written about such a scene -- doubtless she would have added a twist to the tale -- but I wonder if Lorca wrote a poem about Semana Santa? There was a full moon rising over Ronda on Good Friday, and I remembered a fragment of Lorca:
'Through the sky goes the moon,
gripping a child's fingers...'
Posted by Justine Picardie at 10:04 7 comments: 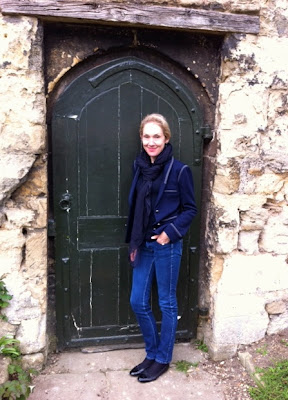 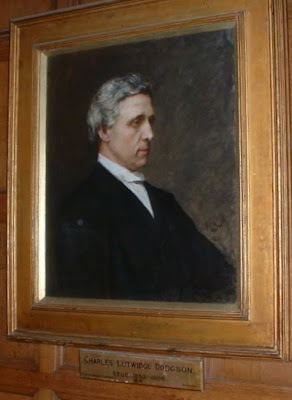 Very much enjoyed a nostalgic weekend back in Oxford, and meeting a wonderfully responsive audience at the Sunday Times Literary Festival. The only disappointment was that the bookshop ran out of copies of Chanel (apologies to all those who queued, only to be turned away; it was as frustrating for me as it was for those who had been kept waiting).
Calm was restored when I found the secret door to Alice's garden (see above; needless to say, it remained locked) and the portrait of Lewis Carroll/ Charles Dodgson in the Christ Church Great Hall (now world-famous as Hogwarts, but hugely impressive for its own extraordinary academic, literary and political history). Time for tea afterwards at the Randolph hotel, and a chance to admire Osbert Lancaster's illustrations for Max Beerbohm's novel 'Zuleika Dobson'. (Not my favourite Oxford novel -- Brideshead Revisited can never be bettered -- but Zuleika, for all the damage she wreaks, deserves some celebration, as the femme fatale approaches the age of 101).
From the Randolph, back to Christ Church to hear Andrew Marr's talk on The Diamond Queen (as entertaining as his television series on the subject), and then a fortuitous meeting at dinner with Bettany Hughes, who told me about her new documentary on the hidden history of women and religion (apparently there were female bishops in the early Christian Church, and a deaconess named Phoebe, mentioned only briefly in the Bible, but intriguing nevertheless).
Alice, Zuleika, goddesses, and the Queen; what more could one ask for? All that was missing was a chance to dance the Lobster Quadrille, but walking across Tom Quad at midnight was almost as magical...
Posted by Justine Picardie at 11:47 8 comments: