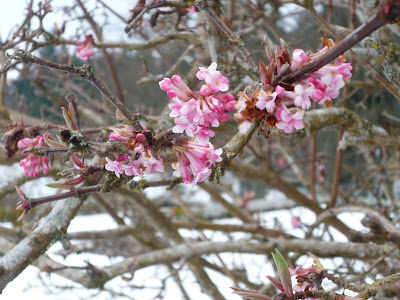 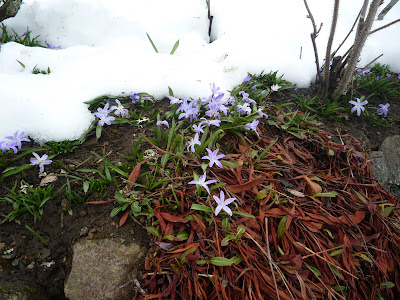 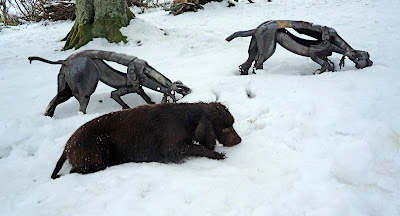 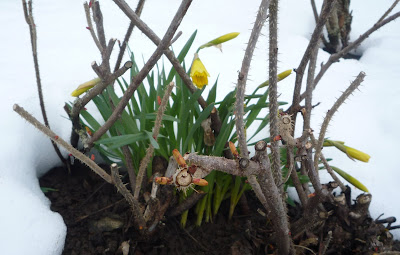 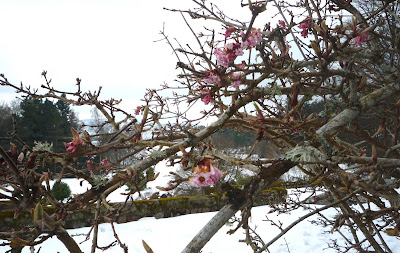 Mind skittering this evening, after slow journey north to Scotland. Flight grounded at Heathrow (smoke in the air traffic control tower), delayed departure, but finally up and away through the clouds, then descent to Aberdeenshire afternoon. Snow thick on the lawn at Tillypronie, and even deeper in the woods; I sank in drifts, but felt uplifted, even so, by the bravery of spring. The dog gamboled like a puppy, despite his greying beard and recent status as a grandfather, beside the sculpture spaniels (by Helen Denerley). There are snow-drops in the garden, and little clusters of daffodils; the wisteria is just beginning to bud, and the roses are turning green at their furthest tips. I admired the blossom at the side of the house, and mourned the broken-branched azaleas (crushed by weeks of ice and heavy snow).

Then I went in search of mountain hares, remembering the first time I came here, last summer, and saw one running across the hill, which seemed to me to be a good omen. A multitude of pigeons today, and a long parade of ducks, paddling across the pond and then home through a field of snow; two Highland calves; one white pony; half a dozen pheasants, and a great many intriguing paw prints, disappearing through the trees, into a Narnian wild wood. But no hares, as yet. So I returned to the house for dry socks and hot tea and ginger biscuits; thus fortified, went roaming through the book shelves (virtual and real) to search for hares. The March Hare popped up as a guest at the tea party in 'Alice in Wonderland' -- madder, wilder than the white rabbit; and then I set off in pursuit of T.S.Eliot's 'Inventions of the March Hare'. Of which more later, as now it is time for dinner...
Posted by Justine Picardie at 11:01

I saw lilacs flushed with dark purple buds the other day; it made me stop and weep.

In memory of Elspeth Thompson I walked to a new flower shop several blocks away and returned with my arms full of pink jasmine branches (I think that's what they were), white hyacinths, frilly daffodils heavy with fragrance, and a stem of flowering rhubarb. Pictures are here: http://www.flickr.com/photos/kairuy/sets/72157623638404305/

You remind me of the Seamus Heaney poem about the hare (brought to my attention in an essay by Polly Devlin, it's from "Squarings"):

Choose one set of tracks and track a hare
Until the prints stop, just like that, in snow.
End of the line. Smooth drifts. Where did she go?

Back on her tracks, of course, then took a spring
Yards off to the side; clean break; no scent or sign.
She landed in her form and ate the snow.

The perfect poem -- thank you so much, Kairu...

Your lovely photos of flowers in snow seem the epitome of spring hope.
Beautiful cut flowers, kairu.
We are thankfully free of snow in Maine now. Must ask my woodsy husband if there are hares here.

The late snow was an Easter blessing, covering a mincemeat of patchy frost and mole-hill damaged lawn.Many plants seem to have been burnt to a frost bitten black and my Granny's fern (in the porch)has died; I'd had it for 20 years.On the bright side the children have had a great season at Glenshee.