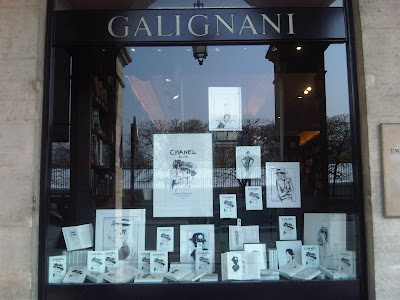 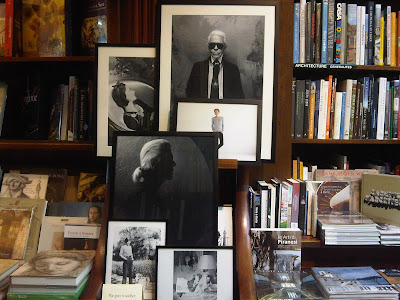 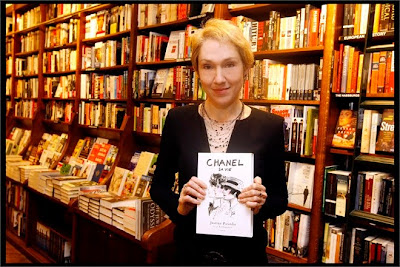 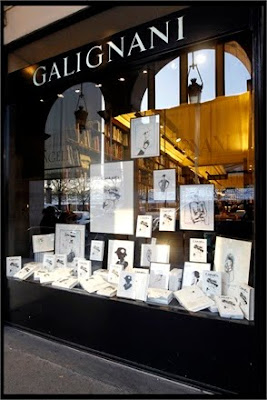 I'm so behind with the blog -- have been jotting notes, and taking pictures, and there's much more I want to tell you -- but midnight is approaching, so very briefly, for now, here's a quick update on the launch of the French edition of my Chanel biography, with lots of new drawings by Karl Lagerfeld. It was held at the wonderful Galignani bookshop in Paris, on the Rue de Rivoli, just along from Angelina's, where Chanel dropped in for tea in the afternoon. Galignani was the first English bookshop established on the Continent, and has been a printing press since 1520, so its history is extraordinary, as are the premises in Paris, which have hosted everyone from Proust to Hemingway (and was Chanel's favourite bookshop, as well). It's one of those places where the past feels palpably present, and I wandered around in amazement, admiring first editions of Lord Byron and letters from Hemingway and Jung, in between doing some interviews with remarkably patient French journalists... Oh, and Karl Lagerfeld came, which caused a great stir -- great crowds of fans and paparazzi outside -- though he seemed very much at home in these bookish surroundings (his own library is immense), and signed my book, along with those of his myriad admirers. So it was all rather dreamlike, and very enjoyable -- much less fraught than being published in one's own country...
Inevitably, perhaps, I came back to London with a bumpy crash-landing... even though the blossoms are so beautiful here, and it's lovely to be back home. I feel guilty about the moments of gloom that have overtaken me -- how lucky I am to be alive in a glorious spring -- but one's mind swoops high and low, from the mundane to greater matters and then back to the fragility of magnolia petals in this morning's sudden downpour of rain.
Posted by Justine Picardie at 14:46

sigh, that sounds wonderful Justine, viva your creativity! Would have love to have a wander around that bookshop, fondled the Byron and asked Karl about his library and his latest favourite book - thanks for this post, a dash of all the things I love about Paris in one gulp, the perfect antidote to a melancholy morning x

I love these quick updates, Justine, they're like a perfect treat, a box of Ladurée macarons, perhaps. I feel as though I were in Paris with you! (And how I wish I had been...).

It always feels a little flat to come home after a trip, however short an escape from everyday life it might have been...Falling flower petals are a sweet reminder that beautiful moments are fleeting, but they do exist...

I would have been so awe-struck if Karl Lagerfield showed up to autograph a book I had written. Did you make a fool of yourself?

What a trip. How marvellous that La Lagerfield supported you. When you've spent time among the stars it's bound to be a bumpy home landing. Thank you for sharing in such dream-like detail.

What a beautiful bookstore! Sounds like a lovely launch. Traveling is hard on the system.

KL must make a habit of hanging out there: last time I was in he was there, too. It's such a great bookshop. The French do well to keep so many great individual bookstores - ours in the UK are all withering away, I'm afraid.

Thank you, Justine - another address to add to my list for our June trip to Paris, after the one for Chanel's apartment. I've booked the Eurostar and a hotel near the Gard du Nord so it's getting closer. Their website is beautiful and your book looks terrific in the window.

Very pleased to read an interview with you in "Point de Vue", a French weekly magazine dedicated to royalty and stars (of the theatre and literary world)

By the way, if you are still a bit fed up I'm sure you'd be cheered by the lovely window display in the Paris book shop Chantelivre in rue de Sevres! Your book is at the heart of it surrounded by other lovely fashion books including an amazing one called Savile Row with an immaculate Cary Grant on the front... So chic. It's in the heart of 6th next to Hermes and opposite Le Bon Marche.

Just had a small computer hiccup, but thank you to everyone for your comments. I am very excited to hear from Lewis that Coco has found a place in rue de Sevres -- I must try to find another excuse to go to Paris to visit Chantelivre.
KL clearly a bibliophile. The first time I met him was at the end of the Nineties, in his former house on the Left Bank, and I've never seen so many books in a private library. The most incredible collection, and he seems to have read everything...
Meanwhile, have been up and down, somewhat like a yo-yo; or rather, like the March weather -- a downpour one moment (or rather, tears in the shower yesterday morning), and then brimming over with the joy of springtime. The first of April tomorrow; hoping not to be foolish...

I've always been amazed by Monsieur Lagerfeld's various homes; he seems to shed a skin with each house and evolve into a new one.

The shower is the perfect place for tears, or perhaps a dark, nearly empty movie theater (so long as you have a pair of sunglasses to put on as you leave...). Speaking of films, I went to see 'Jane Eyre' with a fellow book-loving friend (she's actually a middle school librarian). Both of us had read the novel as children and there was much inappropriate giggling from our corner of the theater. (And we both loved it).

Cherry blossoms are out, their soft pink petals falling like snow. Spring!

Dear Justine, one last thought before I sleep. We think of spring as a season of rebirth and awakening, and yet it can be unexpectedly cruel (what is that opening line of 'The Waste Land,' the one that every student learns? April is the cruelest month...). The way beauty can be cruel.

I learned last year, with the death of Elspeth Thompson, that I needed to grasp the chance to tell people how they have moved me, inspired me, shaped my world, when such moments are offered to me. I come here again and again, Justine, for a glimpse into something that will push the corners of my universe farther than I can imagine, a book or a poem or a beautiful garden, centuries old. For the conversation, for the understanding that I am not alone when the world weighs heavy on my shoulders.

Didn't realise they have remade Jane Eyre yet again. Thanks for that news, kairu. Looked it up on IMDB and watched the clips there. Will be interesting to see how it compares with all the others. Interesting and unusual casting for some of the parts. What did you think of it?

Loved the Deep Mid Wintor/matchy matchy annecdote this morning on Womens Hour. I read many years ago about the 'abuse' of the Duchess of Windsor in her later life and wondered if she ever regretted the path her life took. Did the aimless life of luxury fulfill her? Was Edward man enough for her (suspect not at all) An interesting subject, I look forward to the Madonna film about her.

Jaywalker, I liked this Jane Eyre very much indeed. There was something steely and indomitable about Mia Wasikowska's Jane, that I don't remember seeing before. I liked that she was so young - 18 or 19 during filming - but then the entire cast was pretty young. Michael Fassbender admits to being maybe a decade too young for Rochester, but really he is the dishiest of all the Rochesters (Toby Stephens was really *too* young in the most recent BBC version). And Jamie Bell (as St. John Rivers) looked about 14.

There was a New York Times article about how Jane Eyre is so often filmed because it provides plenty of high drama while being relatively inexpensive to produce in terms of number of actors, sets, costumes, etc. (Compared to, say, Pride and Prejudice).

Thanks, again, to everyone. I'm looking forward to seeing the new Jane Eyre. Did anyone hear the latest version of Wuthering Heights last Sunday on Radio 3? I wasn't convinced by the f***ing etc. Hearing Cathy declare her effing love for Heathcliff just didn't quite work for me... And ghost of Cathy at the window wasn't nearly scary enough. She sounded grumpy, rather than eerie...

I didn't know there was a new 'Wuthering Heights,' too, though I love listening to BBC R3 and R4 online. Was it modernized? I don't remember any"effing," but it's been a while since I read it...

It wasn't until seeing the new 'Jane Eyre' that it occurred to me that this is the original romantic comedy: the 'meet cute' whereupon the heroine startles the hero off his horse, the verbal sparring, the bit where she throws water on his bed because it's on fire. All this trickled down through the ages to become our modern romantic comedy, though less successfully in recent generations...

No effing in the original Wuthering Heights, but there was the in latest dramatization on Radio 3. Didn't work for me, I must say.
I like your idea of Jane Eyre as original romance; but what about the overshadowing gothic? Madwoman in the attic, abused children -- it's so dark!

Bien joué. Can't wait to have this french edition of your book.