Beware the ides of March 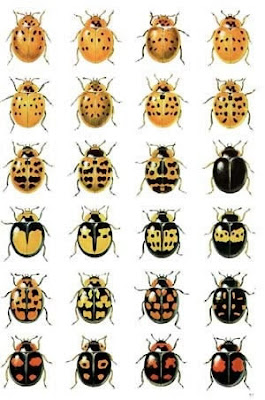 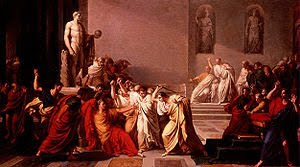 The ides of March have come and gone this week, which may or may not explain why I feel quite so jittery. No Shakespearean soothsayer has come to warn me against the ides; life in my quiet north London street has not taken on the tragic proportions of Julius Caesar's Rome, as far as I can tell, although a sinister, possibly suicidal legion of foreign harlequin ladybirds has invaded my study through the south-facing window, most of them dying soon afterwards.
There have been glorious bursts of sunshine, in between sudden showers; the daffodils are finally blooming; the cat is warming her old bones on the grass. A fox skirted past her this morning, but she seemed not to notice; I kept a watchful eye on both of them, but the fox was simply passing through, up and over the wooden fences into neighbouring gardens.
Yesterday I made one of my mother's fail-safe recipes from my childhood: a packet of ginger biscuits, crushed and mixed with a little melted butter, then patted to form a base on a spring-form cake tin; topped with a tin of condensed milk mixed with a tub of cream, and the juice and zest of several lemons. This works like magic: the lemon juice thickens the creamy mixture, and it all sets in the fridge to form something that tastes far more delicious than the sum of its parts.
The dishwasher is broken, after a decade of patient service. I'm hoping it can be fixed, as I've lost faith in the zen art of washing up.
But the good news is that I found my copy of Angela Carter's essays: 'Shaking a Leg'. Here she is writing in the London Review of Books in 1985 on Elizabeth Wilson's study of fashion, 'Adorned in Dreams': fashion matters, she says, 'Because women do love to dress up, and also to dress down: we dress to cheer ourselves up, to reward ourselves, to transform ourselves, to amuse ourselves... to pass unnoticed in the crowd, to pass messages about ourselves, to pass the time.'
Memo to self: find Elizabeth Wilson's book; sweep up dead ladybirds; move on from melancholic superstition; embrace the spring...
Posted by Justine Picardie at 16:19

That lemon dessert sounds wonderful. It reminds me a little of Jane Grigson's (somewhat more complicated) lemon honeycomb mould - it involved gelatin and cream and eggs, separated, with the yolks beaten with cream and sugar and lemon juice and the whites whipped until they formed stiff peaks. Everything was folded together gently and placed in a pan; like magic, as it chilled, it would separate into two distinct layers of creamy, lemony pudding, capped with a clear lemon gel.

Today was alternately grey and cloudy or bright and sunny, interrupted by a great burst of soft spring rain. The flowers are blooming, and everywhere the air smells sweet, especially at that magic twilight hour.

Now I have to go dig up my copy of "Expletives Deleted." I know I saw it the other day, but once I start actively searching it will once again melt into the rest of my library and become invisible...

Just read the Carter essay on the stories of Grace Paley, one of which apparently begins:"My husband gave me a broom one Christmas. That wasn't right. No one can tell me it was meant kindly." !!
Here in Hobart (which is the last civilised stop before Antarctica) it is turning into autumn after a long, hot summer. It's still 18 to 23 C in the day but the leaves are blowing around and the hanging baskets have done their last gasp of blooms. Our Cavalier King Charles has grown his thick feathery winter coat and today was the first day I had to put a cardigan on over my shirt - bah!

Ditto ladybirds - what's going on?
The piece you wrote for the Times on Sat rang so true, speaking as someone whose Mother divorced twice.

I am glad March is marching inexorably into spring. I saw catkins today, great fluffy grey and lemon yellow ones. Talking of lemon, I will give your pud a whirl myself this week. Thank you.

Dressing to amuse oneself how true. Thank you for sharing such a great quote. Amazing how many there are about clothes...

Unrelated to your blog (although I am inspired by the pud), our local film club will be showing Coco Before Chanel at 8pm on 24th May, 3 days after your appearance at the Du Maurier Festival. Are you still in Cornwall then and could you introduce the film for us? The film club is in Lostwithiel, a few miles upstream from Fowey and a beautiful old town with great pubs and restaurants - ideal for an evening visit!

Spring is here and isn't is lovely after all that snow and cold and there's something rather wonderful about stroking your cat's sunwarmed back. On Sunday as I took a welcome break from gardening sitting in the sun our two cats and labrador arranged themselves about me warming on the sun-warmed stone terrace. Oh spring is definitely here. I love the boldness of your fox and the superiority of your cat!

Yes Spring has definitely arrived. The tortoise has just emerged from the garden shed after many months of hibernation! Funny how we all seem to embrace Springtime, but for a few like James Lees-Milne in his diaries (of which I adore).
"I said to Brian Gasgoine that the Spring still upsets me-the detestable Spring as Constantia Fenwick called it. He said it upset him too; That it reproached him. I said, presumably because you feel, here is the old earth which has rejuvenated itself, and is ready again, whereas you etc. He said "yes that's the reason". He must be about 25 or 26

Another lovely post, thank you. It's a bit raw here today, but the crocus are up, and even the odd daffodil, which for Maine in March is a small miracle.
My husband and I are both self- employed and are doing taxes today which makes us feel a bit raw and superstitious.
Good luck with the dishwasher.
Looking forward to hearing more about Elizabeth Wilson.