A new look for an old Mitford 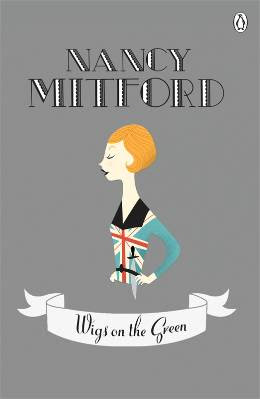 I am just surfacing from a week of too little sleep and too many deadlines, but this is my reward. Penguin have reissued several Nancy Mitfords with fresh new covers for spring, including Wigs on the Green, which has been out of print for almost 75 years. I've never read it before, despite being a Mitford fan, so I'm curious to discover the novel that she did not want reprinted in her lifetime. First published in 1935, it was Mitford's third novel, and was sufficiently autobiographical to cause a rift with her sisters Diana and Unity. According to the excellent introduction by Charlotte Mosley, the character of Eugenia Malmains is a thinly disguised portrait of Unity, while Captain Jack modeled on Diana's lover and future husband, Sir Oswald Mosley, the founder of the British Union of Fascists. When Mitford's publisher asked her to consider reissuing the book in 1951, she refused. "Too much has happened for jokes about Nazis to be regarded as funny or anything but the worst of taste," she wrote to Evelyn Waugh, "so that is out."
Initially, Nancy had hoped that 'Wigs on the Green' might amuse Diana, but this was very far from the case. Charlotte Mosley reveals that 'The main reason for her refusal [to reprint the novel], apart from the jokes about Nazis, was that the book had caused such furious reactions within the Mitford family: Unity threatened never to speak to her again and Diana, who had recently divorced her first husband for Mosley, more or less broke off relations until the end of the war. Added to this, no doubt, was Nancy's unwillingness to revive the memory of Unity's suicide attempt in 1939 and her consequent death in 1948.'
Charlotte Mosley has already proved herself to be an exemplary editor of the Mitford sisters' letters -- every time I dip into her satisfyingly abundant book, I always discover another plum. Here is Nancy's letter to Diana, written from Paris on 4th September 1947:
'Yesterday I stood at Dior for two hours while they moulded me with great wadges of cotton wool & built a coat over the result. I look exactly like Queen Mary -- think how warm though! Ad [a cousin of the Mitfords] says all the English newspapers are on to the long skirts, & sneer. They may, but all I can think of now one will be able to have knickers over the knee. Now I'm nearly fifty I've decided to choose a style & stick to it, & I choose Dior's present collection [Christian Dior's second collection, which kept the nipped waist of the New Look, but had longer and fuller skirts.] Simply, to my mind, perfect... Some French paper has said that Queen Mary's dress for THE wedding [of Princess Elizabeth to Prince Philip] is to have a huge pocket over the stomach -- what can she being going to put there. Diana [Cooper] says a baby kangeroo...'
Am going to make myself a cup of tea now, toast a hot-cross bun, and read more...
Posted by Justine Picardie at 09:45

I've just ordered Wigs on the Green (along with Don't Tell Alfred) and I hope they are, as I write this, winging their way to me across the Atlantic!

Will have to make some hot cross buns to eat while I read them.

I've not read any Nancy Mitford but these Penguin re-issues with their gorgeous covers are reminding me that I should.

I forget to floss said...

For any Mitford fans out there, I'd definitely recommend going to The Swan in Swinbrook. (Cotswolds) The Duchess of Devonshire still owns it and it's packed full of Mitford miscellany. Food's pretty yummy too...

I have read this one before and enjoyed it - but what a great cover - they have got it just right!

Thanks for sharing
Hannah

That's great news - I absolutely love Nancy Mitford's books, and am on a real mitford kick at the moment.

I really do want to read Wigs On The Green- if nothing else, to see what her lampooning of Unity was like, and what exactly the book that caused her and Unity to stop speaking to Nancy, was like. I really do enjoy Nancy Mitford's humour- it's a style that really belongs to that era, I feel.

I almost bought Wigs on the Green today, but went for Wolf Hall, by Hilary Mantel instead. A treat for another time.
I've started up my Mitford Mania again, as their letters are some of the few large tomes I've allowed myself in my new house .... reading the book that caused the largest family rift will be a must.

I would like to read the novel you mentioned that Mitford didn't want reprinted in her lifetime, I bet it is really cool as the rest of her works. Now I'm reading "The Calling" by Steward Sildenafil and it is pretty good do far!

Well I was looking some legal procedure for my case testimonial about Handwriting expert and Handwriting analyst in Google although I have done lot of research and development about Handwriting analysis before suddenly my search stopped me at your blog I really enjoyed reading it. I'm supposed to be somewhere else in a minute but I stuck to reading the story. I love Your Blog……..