The tree of forgiveness and the thing with feathers... 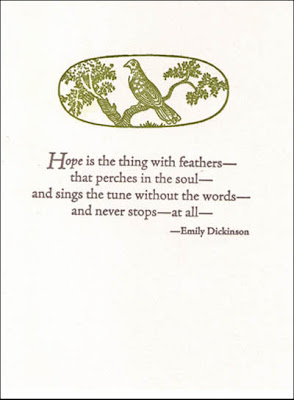 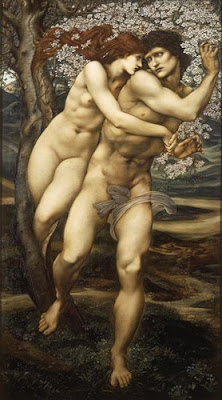 Thank you for all your comments on the previous post, which were so kind and inspiring and reassuring, and just what I needed. In response to some of these comments (in no particular order): I'm afraid I won't be able to stay on in Cornwall for the film club (I have to get back to London for the start of my son's GCSEs), but I will be talking about Coco Chanel at the Du Maurier festival, and would be happy to say hello to anyone then, and answer any questions about the film and its relationship with the truth of Chanel's early life (not that truth is ever immutable, for a woman who reinvented her past).
I have gone in search of James Leigh Milne, inspired by treeofforgiveness. I've also been prompted to read about The Tree of Forgiveness, the painting by Edward Coley Burne-Jones.
What else? My dishwasher has been fixed, hurrah, although when it was pulled out from the wall, a sinister and persistent leak was revealed, which has just been mended (I hope) by a cheerful plumber called Barry. Meanwhile, the oven has started rattling and coughing, which sounds ominous. It's as if the kitchen is complaining after a long winter...
The ladybirds are still flying in, crashing and dying on the windowsill of my study. There is a soft rain falling, and a blackbird singing in the garden, but no sign of the fox today. A squirrel has been eating the buds on the magnolia tree, so I threw a tennis ball at it, which missed; it simply stared at me disdainfully, and carried on nibbling. Daffodils and primroses are blooming in the borders, despite the diggings and scratchings of neighbourhood cats. My elderly cat is back indoors, escaping from the drizzle into the warmest spot on the sofa.
I've been reading Emily Dickinson; good for the sharp days of spring:
"Hope" is the thing with feathers --
That perches in the soul --
And sings the tune without the words --
And never stops -- at all --

I've heard it on the chillest land --
And in the strangest Sea --
Yet, never, in Extremity,
It asked a crumb -- of Me.
Posted by Justine Picardie at 04:50

Emily Dickinson's poem was just what I needed after the day I have had. Plus I looked up the dates for your chat on Coco- I will be in Mevagissey (a short ferry hop from Fowey) the week after :(

I too have had squirrel run ins - I've tried balls, bean cans (empty - I'm not that cruel) and powerful water pistols. It seems squirrels these days have no fear. I blame the parents.

I've just finished (re)reading Angela Thirkell's "The Duke's Daughter, which is one of my favorites of her books. It has a Burne-Jones portrait on the cover (Thirkell was a granddaughter).

I love that Dickinson poem. Just what I needed on a gloomy wet day like this one. I feel like Lottie Wilkins at the beginning of The Enchanted April, in need of an Italian holiday.

Oh, what a shame you won't be in Fowey at the same time as me. We could have shared a cream tea (or two).
Now, need to know more from Kairu about Angela Thirkell. And am off to check out Gondal Girl's blog...

Justine, Angela Thirkell's Barsetshire novels span close to thirty years, beginning in the early 30's and ending with her death (the last one was completed by another writer after her death). She wrote one a year. They are intimate and cozy and yet somewhat complicated, involving various families in that fictional English county of Barsetshire as they live through the prewar years, and on through WWII and its privations, and the post-war years with its own struggles.

They are charming novels, as comforting as a cup of tea and a plate of cookies. I love them.

kairu - do you need to read them sequentially? I just looked on amazon and her first novel 2nd hand is a reasonable 5 pounds but the 2nd is 15 pounds and says it's a reprint so perhaps some are heard to come by?

I read the Thirkell novels out of order - first, the few ones my high school library had, then in alphabetical order as they were arranged in my university library. I will say that it took me years to collect them all, and I did pay about $25 US for a few of them. They do make more sense chronologically - rambunctious young children grow up, mature, go to war, come back and fall in love and get married. Crusty old earls and their duchesses die and leave their titles and grand houses in the hands of nephews who come into the title sideways, as it were.

But you can read them in whatever order you want. There is a character, Mrs. Morland, who appears now and again (she is the central character of High Rising). A widow with four sons, she writes novels to support her boys, and she is always claiming that she writes one novel a year, "and they are all the same." I suppose she represents Thirkell herself.

My favorites are: The Duke's Daughter, Pomfret Towers, The Headmistress, and Growing Up (the last two are the first ones I ever read). Moyer Bell has been reprinting the novels, but they are still hard to find.

Thanks, kairu. I'll order the first one from amazon and see where I go to from there. Have just finished Penelope Lively's "Consequences" and loved it. Have now started the 2nd in the Swedish detective series by Ake Edwardson so should jut about be ready for it when it arrives!

Thereafter product diversification has become the trend of hermes handbag . Ties, scarves, perfume and apparel all fell into the discount Hermes handbags . But what make replica Hermes handbags extraordinary are its bags.
lida daidaihua proof diet works by changing calories constantly. The secret to daidaihua success is by rotating what you eat to maintain a high metabolism which in the long run creates a quick fat burning procedure. When you buy lida slimming for idiots program, you get some great slimming capsule also. A menu generator, the most valuable tool I have ever seen, allows you to type in your favorite foods and slimming capsules spits out exactly what you should eat that day in a 4 course meal. This lida meal needs to be followed for 11 days.
Manufacturers of Tiffany co exercise the same care and dedication in creating jewelries. It's because of this the quality of silver accessories are almost as good, if not just as good. Tiffany sets make use of the same metal base as a silver sets .
When fashion accessories such as replica Chanel handbags are indisputably status symbols, why consider buying discount handbags? The truth is that many Chanel handbag styles vary surprisingly little from season to season, and only the most discriminating Chanel aficionado’s can usually spot seasonal differences.

It's all about my passion: art-works. We just loved what you posted above, specially the part regarding The Tree of Forgiveness... It's my favorite piece of art.